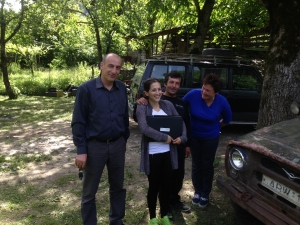 Marianne Bols, founder of the Fair Trees concept, along with a delegation of German and Danish Fair Trees producers, showed strong social commitment at an impressive donation program taking place during the first week of June:

Again, Fair Trees made sure to provide medical and dental assistance for the local population this year. More than 500 children were examined and were given toothbrushes and toothpastes.
“I personally feel such joy at giving something back to the community, which has provided us with a steady production of high-quality seeds, plants and Christmas trees for many years. Fair Trade makes a difference, and at Fair Trees we believe in a direct connection between words and action, making the action count for the individual cone picker to the community in which he lives”, says Marianne.

A child of one of the cone pickers has just undergone surgery with the financial support of the Fair Trees Fund.
“This year again I met a lot of locals who thanked me personally for our efforts in the community. This is of course only possible because of the support for the fair Trees concept from responsible producers and consumers, and I would like to take the opportunity to express my gratitude for that.”